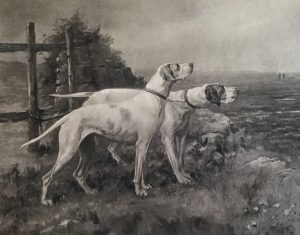 Pointers Through the Years

Pointers are thought to be an ancient breed, though their origins are not easily pinpointed. Art with recognizable breed characteristics has been found in the tombs of Egypt. Written references to pointing-dogs date back to the Middle Ages, and place them in Italy, France, and Spain. Then, in 1713, British Army officers took Spanish Pointers home with them at the end of the War of Spanish Succession, changing Pointer history forever.

Throughout the next century, the British developed the Pointer and the sport of shooting gamebirds over these fabulous hunting companions. Judicious outcrosses with French Pointers brought refinement and speed to the coarser, slower Spanish Pointers, thus shaping the more athletic Pointer we know today.

During the 1860s, Pointers were imported to America by sporting men eager to take up the pleasure of bird hunting over the “aristocrat of gun dogs”.  The Westminster Kennel Club (WKC) was organized in 1877 primarily for the acquisition and improvement of Pointers. The Club’s English import, “Sensation”, is still used as their Club logo today. WKC held their first dog show in 1877 – to evaluate their dogs away from the field – and it ran four days.

In 1938, the American Pointer Club (APC) was formed to protect and perfect this beautiful breed.  Club objectives include:  bring the natural abilities of the Pointer to perfection, protect and advance the interests of the breed, encourage sportsmanlike competition, and improve and preserve the health and welfare of the breed.

Extensive details about Pointer history can be found in William Arkwright’s book, The POINTER and His Predecessors, which also includes a wealth of info on Pointer breeding and training. A more condensed look at the origins of Pointers, along with a detailed discussion of the breed standard, form and function, can be found in John Laytham’s book, The Pointer.  We encourage you to enjoy these outstanding resources, and use the list in the Pointer Library on this website, to learn more about the wonderful breed we love and share today.

In 1939, the APC began holding National Specialty shows.  This annual showcase of Pointers has grown in size and stature over the years to include the best Pointers and top Pointer breeders from around the world. Events at this week-long celebration include conformation, companion events, field events and a lot of fun with people who have a passion for Pointers.  You can view the most current as well as the past winners of the National Specialty here.