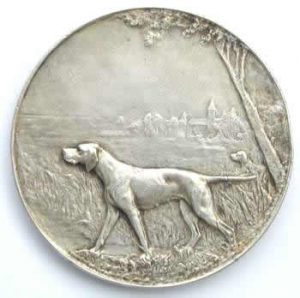 They adopted the physical standard for Pointers as written by Stonehenge (Henry Walsh) in his “Dogs of Great Britain, America and Other Countries” in 1879, later amending the format and some terminology by the time it was published in the 1929 AKC Pure-Bred Dogs. They left the AKC in 1931 for lack of input for field trial judges’ selection and carried on exclusively as a field trial club for several decades. Pointers were without formal representation at AKC until the American Pointer Club, Inc. was established in 1938.  In 2013 its members celebrated their 75th anniversary.

It was during the early mid-part of the 20th Century in the U. S. that the diversion in field and bench types became apparent. With our wide open spaces, many Americans wanted a wider ranging and faster running dog with the tail held high. It is here the bench people came to agree with William Arkwright as he states, “There is nothing for a pointer more necessary than a tail of the right shape, of the right length, of the right carriage and of the right covering.  Today we acknowledge both by holding our National Specialty and National Field Trial Championship. We now  see Pointers that are able to compete in both competitions.

Working to Preserve, Protect and Promote the Pointer

The American Pointer Club is the official parent club of the breed with the American Kennel Club, holding events under their rules.  The AKC expects the club to set and maintain the official breed standard, the written description of the ideal Pointer.  APC also raises money for health research, supports breeders’ efforts to produce better, healthier dogs, educates judges and the public about the breed, and helps families find puppies and adults available from responsible breeders.

The parent club fulfills many roles. With hundreds of members across the country and around the world,  APC brings together people who love Pointers and are dedicated to the betterment of the breed.

Pointer Lovers on a Mission: Protect, Preserve, and Improve the Breed

When dedicated people come together over a shared purpose, amazing things happen.  APC members have a diverse range of interests and experience, yet all are passionate about advancing the breed.  Learn more about the  purpose of the club that fuels our members’ passion.

The best way to truly appreciate the strength and beauty of these athletic, fun-loving dogs is to see them in action.  Or, better yet, bring your Pointer and get into the action yourself.  You can find us every weekend at shows, field events, agility, obedience and rally trials, and anything else our wonderful Pointers excel in.  Their joy and excitement is contagious.

Join the Mission, Join the Fun!

If you agree that Pointers are amazing dogs to share your life with, please join us.  You’ll be connected to a community of people dedicated to these wonderful dogs.  Membership gives you a vote and a voice in shaping the future of the breed.  For additional benefits and how to join, click below.